To identify QTLs controlling grain yield and yield components, an F2 population consisting of 188 plants derived from the cross between two rice pure lines, Binam and Kadous, were grown in research field of Faculty of Agricultural Sciences, University of Guilan, Rasht, Iran, in 2008, and were recorded for 9 important traits related to grain yield. To construct linkage map, 85 marker of SSRs and 20 primer combinations of AFLP markers were studied, which 37 SSR markers and 10 AFLP primer combinations including 35 loci showed polymorphic bands between parents and were used for construction of linkage map. The total length of linkage map and the average distance between markers were 1445.7 and 21.57 cM, respectively. Using the composite interval mapping (CIM) method, 16 QTLs were mapped for studied traits including two QTLs for plant height both on chromosome 7, three QTLs for panicle length on chromosomes 3, 6 and 7, one QTL for 1000 grain weight on chromosome 3, two QTLs for number of panicle per plant on chromosomes 6 and 10, two QTLs for number of grain per panicle on chromosomes 3 and 9, one QTL for empty spikelet number per plant on chromosome 4, two QTLs for grain yield on chromosomes 3 and 6, two QTLs for days to 50% flowering on chromosomes 1 and 6, and one QTL for days to maturity on chromosome 6. Among these mapped QTLs, gy3 for grain yield, tgw3 for 1000 grain weight, ph7a for plant height, esnp4 for empty spikelet number per panicle and pl6 for panicle length controlled 20.1%, 18%, 16%, 16%, and 15% of phenotypic variance, respectively, and were identified as major QTLs. The tight linked markers to these major QTLs can be used for marker assisted selection programs, but for the other markers, it is necessary to firstly construct the high density linkage map and then the markers near to major QTLs can be used to improve the studied population by marker assisted selection method. 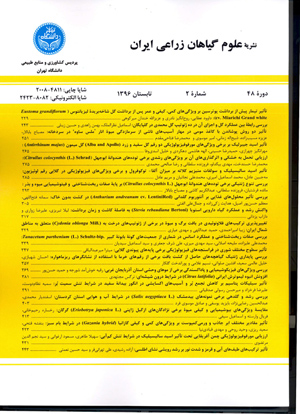